The Endocannabinoid System & How it Works with CBD

There are many people are benefiting from using cannabidiol (CBD) for a variety of different symptoms and ailments. This leads many to ask how CBD can have so many benefits for so many things.

The secret lies in the endocannabinoid system (ECS), a physiological system that every single vertebrate on the planet has within their bodies.

What is the Endocannabinoid System?

The ECS is made up of three primary parts: endocannabinoids, cannabinoid receptors, and metabolic enzymes.

CB-1 & CBD-2 receptors are receptors that act as a kind of “lock-and-key” system, where the receptor is the lock and the endocannabinoid is the key that unlocks the signalling systems between different cells in the body.

There are two main metabolic enzymes responsible for breaking down endocannabinoids. It is because of these enzymes that, unlike other hormones and other neurochemicals, cannabinoids don’t hang around and cannot be stored for later use. 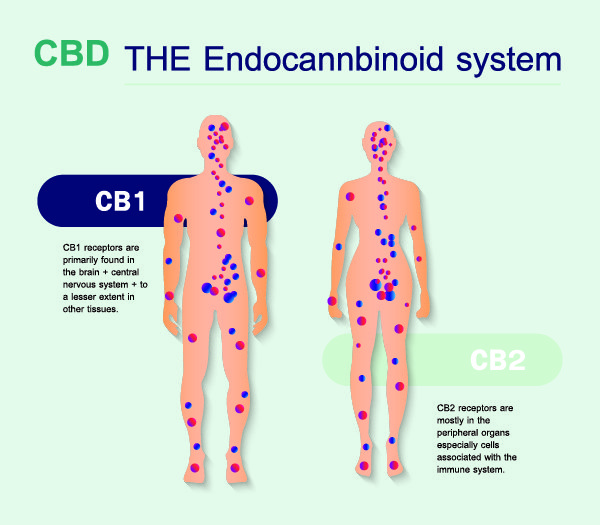 How Does it Work?

The ECS and its components are responsible for keeping the body in a state of balance (or homeostasis) by modulating and regulating almost every biological and physiological system in the body. And when the body is in this state of homeostasis, your body has everything available to it, to perform at its best, allowing you to stay healthy and vital.

However, as with anything else, sometimes things go wrong with the ECS. Sometimes it can happen that there aren’t enough endocannabinoids to go around. This can cause the body to fall out of homeostasis, with scientists now believing that this causes many of the symptoms and ailments we suffer from. When this happens, it causes a condition called clinical endocannabinoid deficiency syndrome.

Because the ECS is your body’s very own cannabinoid producing system that not only helps your cells, organs and nervous system run smoothly, it is also what allows plant cannabinoids like CBD to do its job.

When cannabinoids researchers started looking at how plant cannabinoids interact and work with the ECS, they found the ECS is not only a great target site for therapeutic interventions but that phytocannabinoids like CBD oil can hold the key to restoring endocannabinoid deficiencies.

For instance, scientists found that, although phytocannabinoids and endocannabinoids are chemically different, the way in which they interact with the ECS is very similar. This means that, when you take CBD, it works very much the same way as what your body’s own cannabinoids do.

As mentioned, the ECS has been implicated in various diseases. Here we have a quick look at some research.

As ECS and CBD research is continuing and more information is becoming available about the therapeutic properties and benefits of this phytocannabinoid, more people are using CBD oil for serval kind of reasons. And although we are still in the early stages of knowing everything there is to know about how CBD interact with our bodies, and in particular with the ECS, what we know is that there is a definite biological basis for why it works so well for so many people.